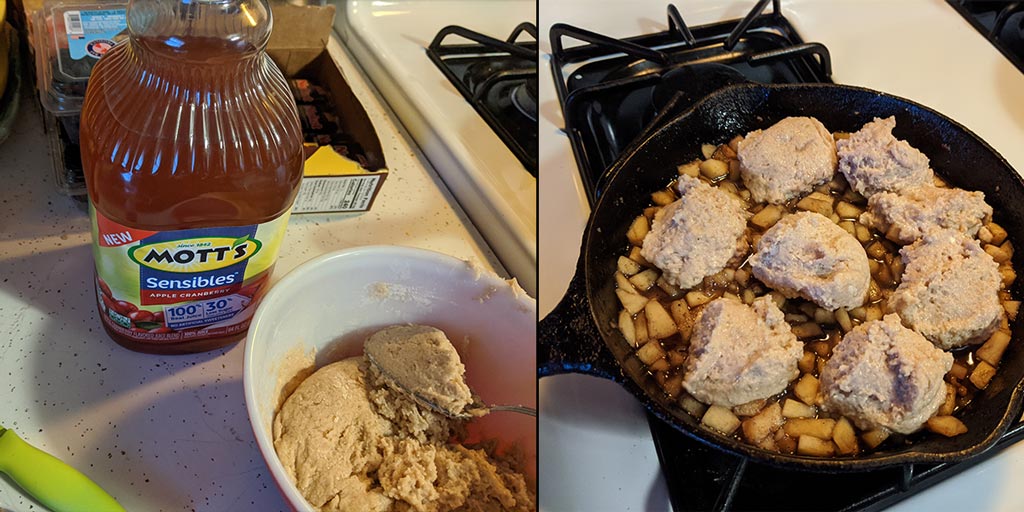 Grunt…that’s a fun or rather weird word for a yummy dessert, isn’t it? If I were to describe a grunt…I feel more like it’s fruit topped with a sweeter type of biscuit which they call “dumplings.” Since dumplings are traditionally cooked in a soup and therefor don’t necessarily get the nice browning these get, not sure I agree. It goes back to colonial times and is in the same family as crisps, cobblers, betty’s, and pandowdy’s, and slumps. Why? Because you’re cooking fruit with some sort of “crust” on top.

I accidentally subscribed to Taste of Home‘s annual recipes cookbooks. I got it for three years in a row before I finally managed to cancel. I kept two of the cookbooks with me and gave one away as a gift…mainly because I have too many cookbooks I don’t use enough anyways, lol.

So I first experienced a grunt thanks to the 2018 edition. That one is a Skillet Caramel Apricot Grunt. It takes canned apricots, homemade dumplings, and a nice brown sugar glaze. I have made this plenty of time using a variety of other kinds of canned fruits. Always is amazing.

When I was working on my caramel apple upside down pancake recipe (which I still need to post here), I also modified this recipe to go with the fall season and the wonderful apples I was getting from my aunt who lives next door.

I bought a bag of apples a few weeks ago since that seemed the best choice of fruit…especially since I bought fresh berries on Friday and by Monday (today) two of them were moldy all the way through. What the heck? I never had them mold so fast on me before. I was very sad. Anyways, back to apples. I ate half the bag fresh and had four leftover and I noticed today they were getting soft and wrinkly. Thus, I decided to put them out of their misery and make a caramel apple grunt. The recipe still isn’t 100% perfect, but it is definitely getting there!

I thought it turned out a little sweet, but overall…this is such yummy, yummy goodness! This goes amazing with coffee or tea. If you have old-fashioned caramel dip and whipped cream…yowza is it good. 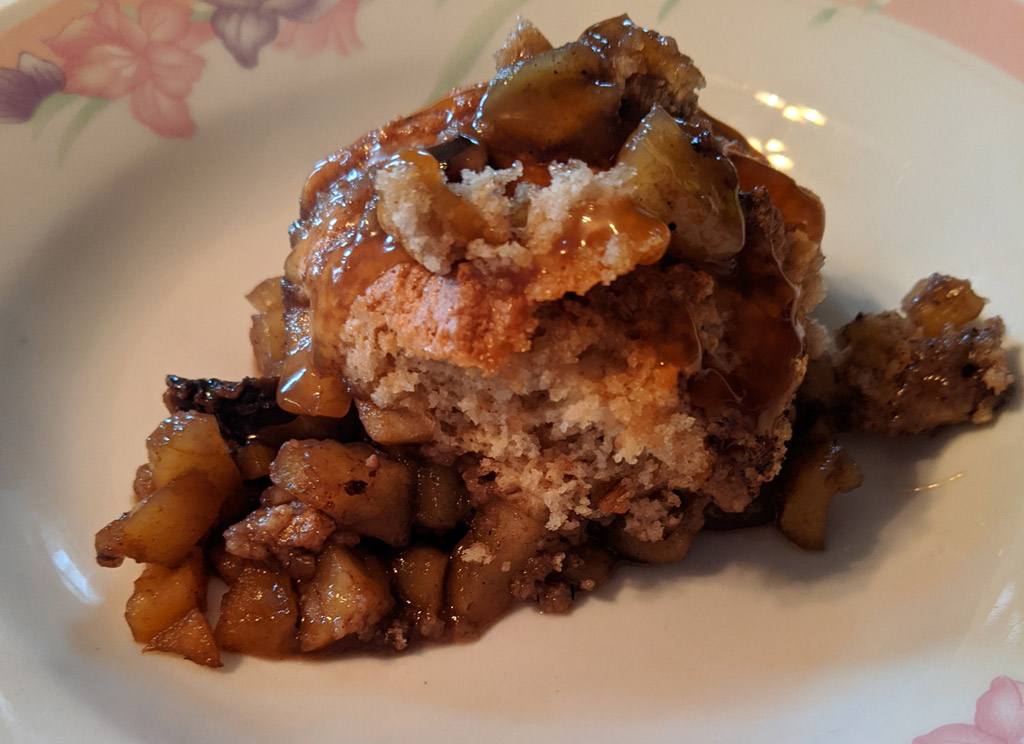 A warm and sinfully delicious combination of spiced apples and sweet dumplings.

I didn’t have plain apple juice nor did I have some lovely apple cider. I would rather use apple cider, but I don’t always have it on hand. I didn’t want to use orange juice or to go into the basement to go through what juices I had available. I had this apple cranberry juice sitting on my counter and thought, why not? Mott’s is decidedly more apple and less cranberry. I was actually kind of hoping more for the acidity of the cranberries, but nope. Overall, you can’t even tell there’s cranberry juice in this at all.

So…go ahead. Use whatever juice you have on hand. Preferably something not too sweet. Actually, if I had thought about it and had the extra apples, I would have done “baked” apples in the slow cooker. These create a wonderful apple juice that I could have used, but I thought of that too late. Next time.

I am the managing editor of NewPages.com - a great literary resource for independent literature [both national and international]. I love taking pictures, especially of the sky and am a total amateur with no real knowledge of how to properly use my fancy digital camera my friend gave me as a Christmas gift. I am also passionate about cooking; Asian dramas, music, and anime; crochet, and writing. View all posts by NeeNee

This site uses Akismet to reduce spam. Learn how your comment data is processed.